Karma, Dharma and Dress code: Why what I wear cannot decide anything about me!

I recently read a post by Ms Kavya Sharma on Youth Ki Awaaz. She was belittled and shouted at, early in the morning because she chose to read The Mahabharata on her metro journey to college. What was wrong you ask? Her mistake was to read the ‘sacred’ text while wearing a skirt and blouse. She was deemed anti-religious, sanskaar-less and what not. In fact, the certain aunty national who brought her misconduct to attention pointed out that she was demeaning ‘Hinduism’ and even went on to say that her parents had taught her nothing.

Dear Kavya, you are not alone. As people (regardless what age-group) who happen to live in this time and age, we have faced shit and a barrage of insults all because of how we dress. We are the one who attracts miscreants in our jeans and T-shirts, salwar suits and sarees. And sacrilege… if we happen to wear shorts or skirts. It is us who with our mobile phones and forward thoughts lure rapists.

Politicians, babas, policemen and women, parents and other people in authority have all conferred that is the reason why women are mistreated, burnt, beaten to death and of course raped. They get all of this by just looking at our clothing. In fact, we cause trouble by just being born as women.

So I wonder if Ms Sharma were a boy, clad in shorts or jeans, would aunty national take offence? I would like to know. So boyzez, please do try doing this!

The thing is incidents like the above used to make my blood boil. I have had my fair share of tryst with idiots. Some have shocked me, made me mad and some I simply chose to ignore. I cannot compete with them. They are too many.

However, reading about Kavya’s incident, brought to mind my own problem. I was lectured on Karma, Dharma, dupatta as preventive measures of rape and whatnot, and all this by a taxiwala uncle. Read on…

Do you believe in heaven and hell? Are you worried your Karma 'which is decided by your dress code' will nail your fate to torture and agony? Frankly, I don’t know and I couldn’t care less.

I was subjected to a Dharmik cab ride where the cabbie took it upon him to berate, agitate and teach me about my wrong choice of clothes during the 40 minutes ride. Here is what happened: 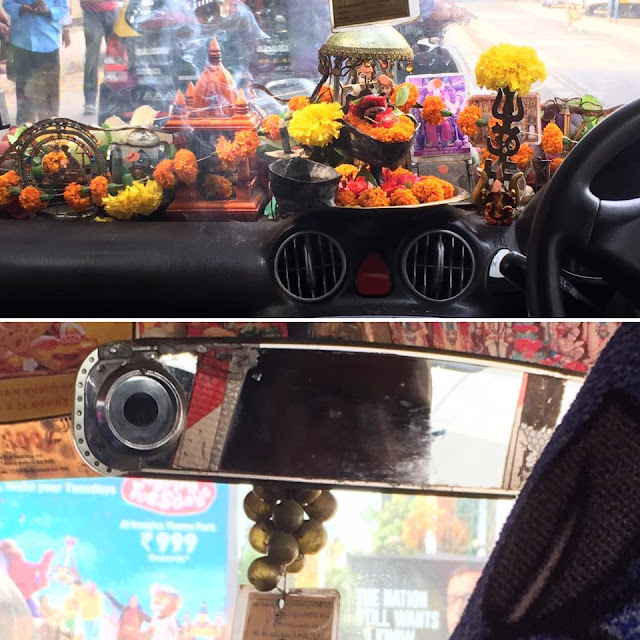 So on a said Tuesday morning; I hailed a cab, our regular Kaali Peeli taxi in Mumbai to head to work. In a minute or two, I noticed his car dashboard. It was decked with a variety of gods and goddesses. I immediately realized it was his personal mobile temple with fresh flowers and incense. It was really a pretty, picture-like with all the yellow and orange marigold flowers. I took a picture too. The ride seemed normal, of no consequence and I was lost looking outside the window.

By now I had categorized him as an attention seeker. Like, come ‘on who talks like this? If he were so gyaani, so awesome, why would he have to advertise himself? Anyways, he rambled on. I think my nodding to avoid his conversation was his green signal to preach further.

When we reached Dadar market, he started his real quest, i.e. his mission was to make me cringe and be apologetic about my dressing sense. He wanted me to nod and agree with him on the whole. Also, by this time he knew his ranting would not make me quit his cab and get off because it was peak traffic hour and there was no way I would try to hail another cab. But what he said next shocked me. I was his passenger, someone he was offering his service to pick and drop. There were no favours involved but a simple transactional business. So whatever did I do to give him the right to preach ‘S#$%’ to me?

He said the following: “Women continue to suffer in this world. They actually deserve to suffer because they have messed up their Karma big time. Women don’t understand that they are the root cause of diabetes, cancer, AIDs in this world. Because they don’t cover their heads. A dupatta is the true symbol of sanskaar. Without Dupatta, they have no purpose in life and are nihilists, hence, add no value. Girls prefer to wear jeans and t-shirt (exactly what I was wearing) and love to expose themselves. This is how they invite trouble. Recently, I was standing outside a temple. A lady walked in trousers and shirt. She was fat. She wanted to offer Puja but the Pandit kept ogling at her. When I asked the Pandit why he was not concentrating on Puja, he said he was attracted to the woman and hence, he could not pay attention to God. Women can avoid rape, molestation, unnecessary touching and cat-calling in public if they wear a dupatta.” Men cannot help themselves, na when women appear so forward! (According to him, men have the right to check out/stare/lust after women anywhere, even in religious places. All this is a woman’s fault, of course.)

I am sure that as a citizen of India he should realize that we live in a diverse country where multiple religions and sects co-exist. Do all have the ‘dupatta’ included in their dress code? No. What about women who go to church?

By now I was seething but this man took my silence as permission to continue. He called himself a Mahagyaani who was cured of this ‘Chaar Bimaris’ due to puja path. He was so gyaani that when he returned to his village, people surrounded him and he would preach to them. Women must learn from men and follow the norms of the society. Sita Maiya was ignorant and Lord Ram dictated the laws of nature to her. Lakshman’s wife was left behind so that she could do seva of her mother-in-law while he protected his bhai and bhabhi. It is a woman’s duty to serve her husband and his parents.

“Aadmi hee aurat ka janam data hai. Yahi Vidhi Ka Vidhaan hai.” Deviji, maine aapko shiksha di hai. Main roz 7-8 deviyon ko shiksha deta hoon…” When he uttered this last line, I argued with him that this was complete bullshit and there is no mandate to not wear Jeans and Ts when visiting a temple.

Shraddha for the almighty must come from within as must respect. But he ranted on and I realized he did not hear anything I said. What made it worse was that he agreed to ferry me he had decided that I need saving from my dress code and that I must tread on the right path of Dharma. I quickly took his picture in the rearview mirror. Little did I realize he had a camera fixed on the mirror which would be recording me the whole time! FREAK.

So here is what I think of him:

Did I ask for his opinion? No. Does my dress code decide whether I am an attention-seeking slut or a regular office going girl? Beats me! Do my Jeans and T-shirt call for men to touch me inappropriately? I think not. Hell, I was covered from neck to ankle!

So what do men like him who wish to dictate ‘norms’, regulations on women think of women? Irrespective of what women wear or do, men like this cabbie aka Mr Yadavji are chauvinistic pigs. Women are mere objects to them who cannot think for themselves, should not think for themselves and need to be taught ways of life. It is women who are always wrong. They should not have a voice. They should listen to their father, their brothers, their husbands and then their sons.

Men like him are dangerous because he believes in their idiocy. They have half-baked knowledge of religion, of the Puranas and stupid enough to think no end of themselves. Hence, they preach because those with real knowledge command respect and not demand it like this idiot.

According to them any woman/girl on the street who is not saree-clad with her head covered in her palla or in a salwar kameez is rape-worthy. She is asking for trouble. Does he not realize that wearing a saree exposes more skin? Also, if covering a woman’s head saved her from daily atrocities, even rape, the woman would be doing it forever. Saying such things he sounded exactly like a certain man-god who is currently jailed. Actually, he too belongs there.

To many of you reading this post, it will seem like a male-bashing fiesta. But it is not. This is not about feminism but about being a fanatic. Dress codes never determine your Dharma and your Karma. What you do, how you do it and how you are towards others decides your Karma. Dharma – something that you truly believe in and practice in real life.

For this Mr Yadav, his Dharma was to belittle women. He wanted followers of himself and not the divine. Checking out my outfit, he quickly decided I was not spiritual or religious in nature, and that I had no respect for God.

Men like him stalk women wherever they are; even the temple is not spared. So in short, he is a potential rapist. Why do I say that? Well, he made it clear that women call for it. It is his staunch belief and imagine, he is preaching this to others too. Whatever one’s beliefs, they are free to follow them. But imposing their ideas and practices on others is simply acting as a dictator. We have already seen enough garbage being churned out in the name of God and religion, for e.g. Taliban and now ISIS.

Just ask yourself this – would you want to be bound? Be dictated to? Preached to as to how to live your life? How come all these are important to and imposed on women? If a Dupatta can cure cancer and Aids, why do we have medical science and why are men not wearing dupattas? Surely they are not immune to these diseases, right?

I can go on and on. If you want to follow the path of Dharma then do so yourself. Don’t preach or make others follow you. Dupatta or not, I am sure each one of us is important to the almighty. Also, it is not a symbol of piety or my beliefs.

-->
Update: Yadavji was a regular in my area. I saw him on two different occasions but he sped by as he had people riding with him. I informed my dad and the husband as well. The next time I hail his cab, I will drive myself to the police station.