Celebrating Navratri? Stop now as we have no right to worship the female form...

Today my mom asked me to go get fall bidding done for her new saree. Navratri has begun and Durga Pujo is just around the corner. This year we are planning to go Pandal hopping on a Saptami instead of an Ashtami or Navmi to avoid the jams and the crowds. I will wear a saree too and my Punjabi husband will tag along for the delicious food.

In a multicultural household like mine, most festivals are a big deal, especially Navratri and Durga Pujo. But in the hullabaloo of festivities, we don’t stop to think of its essence – why do we celebrate Durga Pujo or Navratri at all. To celebrate Ma Shakti – a prompt answer from my mother. Navratri is a celebration of the nine stages of womanhood – a tribute to the power of the female.  But to us commoners, it is a festival of dancing to the tunes of Garba or dandiya or Bollywood music. It is our turn to wear our best clothes, head out in the night, meet family and be merry. And once, this is over, the female form goes back to being what they always are – objectified. 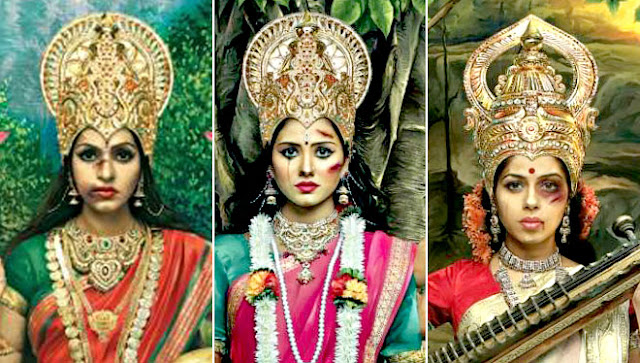 No, I am not blaming only the male species. We are all equals in this crime. I wrote the below post on Speaking Tree earlier this year during Chaitra Navratri. I got a lot of brickbats for it. I know many will come my way even now. I’d appreciate if you don’t think of this piece of yet another example of ‘bra-burning’ feminism. It isn’t. It is a question I would like us all to ponder upon.

We have no right to celebrate the female goddess when we continue to hurt, kill, molest, rape, burn and marginalize women in the country.

The country is awash in festivity. All the pent-up devotion and Shraddha is let out for Mata aka Maa Durga at this point in time. Fasting, bhajans, penance, Ram Lila performances, celebrations etc. fill the air with vigor and fervor.

We love our festivals, don’t we? The very mention of Maa Vaishnodevi has us trekking to the Himalayan terrains to get a quick glimpse of her. We don’t mind the long queues, the mind-numbing jagratas, the Mata ki chowkis and the works. We will show up in our wedding finery if need be to prove our devotion to Devi Maa as we chant ‘Jai Mata Di’. Mind you, these disappear as soon as the festivals end.

In short, we are a devout bunch. We’d do anything to please the gods and in this case, the Goddess. But do we really understand the fundamental core of these festivals?

What is the essence of Navratri? Navratri or Navratri ideally means celebrating the nine forms of Maa Durga across nine days as she comes to earth to annihilate the evil, the injustice and inequality served to human beings.

She is the symbol of strength, of purity, of power as Shakti, the core of femininity, the protector, the giver and the nurturer. We worship her each time seeking her blessings for a better life. She is the divine embodiment of the female form and to celebrate her form, we worship young (virgin) girls, Kanya Pujan before they hit puberty. Celebrated on Ashtami or Navmi during Navratri, it is a tribute to womanhood.

This means that women are Devis or the direct descendant of Maa Durga, right? But in a country obsessed with male children, celebrating Navratri or Maa Durga is a huge farce. There is not one day that we don’t read about rapes in the country. Girls as young as two and three are sexually abused killed, abducted, and left for the dead. Women are trafficked under the garb of domestic work, marriage, money etc.

Rape happens because women ask for it and not because men cannot control their beastly urges to break her will. Women become acid victims as jilted lovers cannot handle their rejection. A woman character is judged on her clothes, her looks, her choice of friends, working hours etc. To top it off, a woman’s consent doesn’t exist. Instead of justice, she is offered statements like you should have addressed your rapist as a ‘brother’, or ‘good girls have never seen alone in the company of men’ and so whatever has happened to you, it is because of you and you deserve it.

For the same amount of work, she is paid less because she is a woman. If she rises quickly, she is judged on her looks, if she doesn’t make it up to the higher rungs, she was never meant for it.

Every man (woman included) has the right to give a woman his/her opinion, tell her what is right or wrong for her, make choices for her and never ask her opinion. She is burnt for dowry, beaten, verbally abused and is a baby-making machine. And god forbid, she gives birth to a girl! She has to be born fair, beautiful, sanskari, talented etc. only to be married off to a complete nincompoop who scores zero on the above-mentioned list.

She is voiceless, choiceless and helpless. And then we worship the female form in Maa Durga’s avatar. Can we imagine doing any of this to Maa Durga? Will she let us harm her, break her and destroy her in such a manner? Have you ever heard a story of Maa Durga cooking and cleaning only to please her family? Or to be sitting pretty to please her husband? Even in the Puranas, Lord Shiva clearly states Maa Durga is his better-half, his Shakti. He views her as her equal. If so, then how come men think themselves as a higher, better species?

Funnily, I know an extremely talented girl from an affluent family who wanted to pursue further studies but was asked to take up something simpler like Fashion designing because it would make her look gharelu on the wedding biodata.

In another instance, a distant cousin who was studying psychology was asked to drop by a male relative and take up cooking or designing so that she could keep her future family happy with her handy skills.

Maa Durga brings Maa Saraswati and Maa Lakshmi with her during the nine days of Navratri. Maa Saraswati is the goddess of education. Education for girls in India is appalling. In fact, education which should be a birthright is actually a luxury in our country! It is reserved for those who can pay big sums and why would someone pay for a girl’s education when all she has to do is to help with cooking and cleaning eventually?

As for Maa Lakshmi, the goddess of wealth, who we bedeck in gold, flowers and what not… We continue to weigh a girl’s worth on her father’s ability to pay dowry. We weigh her for her good looks and not for who she is. However much educated she might be, she is eventually an object to be paraded and displayed.

So does this mean these prayers, sentiments, and devotion is simply for the important days? The stories in Puranas are simply stories that have no meaning or correlation to real life? That we are only to worship the idol and not what it symbolizes?

We often see headlines such as ‘No country for women’ and it is the truth. Even if a woman finds actual water on Mars, she will be judged on the fact that she is a woman.

Let’s give up this façade and live more in reality. We need to look at women as individuals first before we dissect them across various parameters. Only we are able to do this, can we celebrate Maa Durga and Navratri in her honor in the truest sense?