I love to talk, so much so that people have interrupted me and asked if my tongue pains because I talk so much. No, it doesn’t. In my defense, I’d like to say that I always have a story to tell. Typical Bengali trait, I am not denying that. I think this is a good to have ability that I can strike up a conversation with anyone and everyone. In fact, the husband claims that its that ‘look’ on my face – talk to me.

All jokes apart, I have had some interesting conversation with cabbies, i.e. cab drivers driving the iconic Kaali-peeli taxi, Uber and Ola. But why do we talk? Well, why not… You are travelling together for a considerable amount of time (even 5 minutes’ count) so why not talk to kill time? Also, I find it easier to talk to strangers. If they judge me, it won’t matter. We might never cross paths again. But at times, conversations can get freaky! 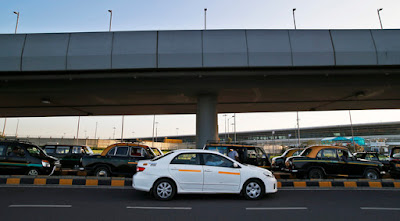 This happened with a Uber driver. No, he did not cause me any harm. It was what he shared. In fact, things got so weird that I actually got off a block before my drop off point just to ensure the driver did not know where I lived. Here is what happened:

On a crazy work day, my Uber app crashed. I could not book myself a ride to get home. So I called the husband to rescue me. He booked the cab for me. The driver had some confusion regarding the entry gate but it was sorted quickly. I got into the cab and we took off. However, getting out of my office complex itself was a confusing maze what with construction going on left-right-center. After 10 minutes of zigzag navigation, we finally hit the main road (just got out of the complex that is) and the driver quipped, “Maidum, yeh log kaam jaldi kyu nahi khatam karte…” and to this I replied: “Kya kare bhaiya… inko thode-he takleef ho rahi hai…”

For the next 10 minutes, no one spoke. We were stuck in traffic and then this cheesy Hindi songs is played on the radio whose lyrics clearly state that the heroine will absorb all the poison coming the hero’s way and only he is the reason for her survival. Very blah but of no consequence until the cabbie burst out in a maniacal laughter. I was looking out but his weird, half-horse like ‘khee-khee’ disturbed me. That should have been my cue but no…

Suddenly looking into the rear-view mirror, he asks me whether I am married. I replied in an affirmative and he just kept quiet. Once we hit the highway he started talking about his life in Lucknow and how the jungle raaj was ruining his beloved city. Mumbai was now home to him. He loved the support and solidarity he received. I nodded at times and pitched in, agreeing to the bits about Mumbai. The real story was yet to begin...