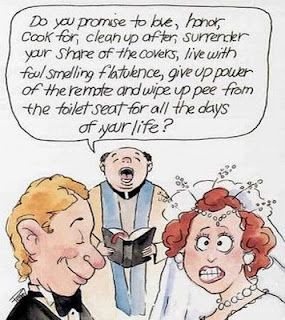 I am starting to get the heebie-jeebies now! The wedding is just four months away and then...my whole life is going to change and how! Bah. Okay I am just being a drama queen here but hey I am getting married and thats my excuse. Lol.

'So how does it feel?' This is the new question thrown at me these days. To this I say, "I am okay." I guess that pisses them off! An 'okay' is not something they would expect from a blushing bride to be. And hey I am not even blushing yet.
They further probe and ask c'on you can tell us? Pre-wedding jitters? Excitement? Something? I just shrug it off. Because I really don't have anything to say. What I actually want to say is 'yes, I am excited but why should I tell you?' So I just smile at their disappointed faces and move on.
Sorry. I don't have the pre-wedding blues as yet. I am still figuring out the clothes and all that jazz, so where is the room for panic? Okay maybe I am just putting up the brave front but frankly I have no tears yet. I know my mum's  gonna cry truckloads and dad is going to be heartbroken but I am not... not yet at least! Its all whimsical still...the wedding, honeymoon [I have no clue where we are going yet!] and life after that.
But recently I was discussing our room-to-be [the decoration aspect] with my fiancé. He and I discussed various colors I want [lol] and what the whole outcome would be. And then I happened to ask him whether he was ready?

"Ready for what?" he asked. "To share your room with me. You know it is going to have my things as well in a short period of time. It will become more girly too," I said. To this he said, "Of course I know that bit and I am ready."
"Did it ever occur to you, even for a second, that you will have to now share everything that belongs to you with me?"
"Yeah. I know that. But frankly nothing of that sort has occurred to me yet and it won't!"
I guess I am a lucky girl because if I had to share my room here I would be apprehensive for a while. I mean, don't get me wrong, I love him, but I can be possessive about my stuff.
For his homeopathy treatment he visits a certain Dr. K and she has been treating him for a few years now. So she knows about me and the up coming wedding. She happened to ask him the same question and yeah, he said the same as above. Dr. K was happy for him and went on to say that many people do panic before they can tie the knot.
Her own brother in law, who is set to get married in November this year, called her up in office one day. He sounded restless and frantic. He asked her to come home right away else he would drop by the clinic. She of course panicked and headed home. The otherwise peaceful household was abuzz with activity. Nobody could understand what had happened to the groom-to-be. And he insisted he would only talk to Dr. K.
So after much coaxing he accepted that he had panicked big time. Suddenly he thought he was losing it all. How could he share his room that had been 'his' for so long with an unknown girl?  It is an arranged marriage for them. Sweating profusely he explained that he could not come to terms with sharing the bed with her or even letting her share his cupboard.
While many of us would have laughed this off, at that very precise moment this was a dangerous situation. Panic can lead to drastic decisions and he could have called off the wedding with no fault of the girl at all. But they managed to calm him down. It did take a while - a week or so. But he is okay now. And is very embarrassed with the whole drama that he put up!
Another close friend of his had called him up late one night. She was getting married to her boyfriend of four years the very next day. The phone call was a lot about crying - the girl on the other side and a bewildered Him on the other side. She had panicked so much that she did not want the wedding. Suddenly it had dawned on her that a day later she would call her husband's home her home and his parents would be her mom and dad. Damn! It was just too much for her and hence, she let loose the dam. Poor kid!
I say, so much nautanki! What will I do? God only knows...I only pray and hope that its just a fleeting thing and passes by quickly. You see I don't want puffy eyes on the morn of my D-day! :D
Email Post
Labels: blah life me musings random