Of loyalty Tests and undercover agents! 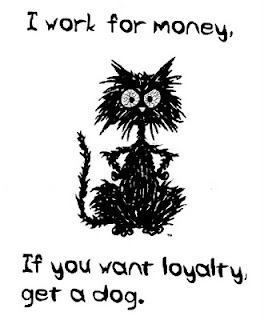 [no offence to cats please!]

Arrggghhh...my first reaction, followed by a grin [the one that comes on when one is really amused]. I am amazed at how my sister finds UTV's Emotional Atyachaar worth a watch. On a regular basis my sister can watch television non-stop. Its a hobby she maintains and that too, very patiently. When I say patiently, I mean to say that I have got to give it to that girl for her immense patience to sit through realty TV shows and sitcoms that make you wonder...did John Baird make a mistake?


Now I happen to walk in on my sister watching yet another 'interesting' episode of Emotional Atyachaar. The reality show has now shifted base to the country's capital after pretending to have wrecked homes and scores of relationships in Mumbai. So here is this woman [won't call her a girl because she ain't one!] sitting with the compere/VJ [yeah, they all have aspirations] describing how much she loves her man. Apparently, they have 'done it all' [we are still in denial, remember?] and have even decided on their baby-to-be's name, who of course happens to be a boy called Vansh. So little Vansh is already this woman's apple of the eye and she thinks her man feels the same.


The man in question happens to be a choreographer or so I gathered. Now the lady knows that her family is against this relationship and will never agree to accept the boy. However, she continues to regale us with her tales of how she sneaks out of her house to cook him dinner or take him some food, how she satisfies him and so on. She, at a point, even declares "Woh mera bhagwan hai"... dialog writers listening?


Back to the serial - She is done with her tales. The television screen now shows the chap [I won't keep him as a chaprasi] and an under-cover agent who calls him. Now the undercover agents are interesting pawns in the reality show as well. They have no identity or so the channel thinks. Girls and guys alike are supposed to pretend and then lure the victim into their trap. And while luring them they can go to any heights. This is perfectly alright with the channel who strives hard to maintain their agents' integrity and izzat. Whenever they seem to get into a sticky situation, they call up and ask them to come way, which by the way the agents manage amazingly. Sigh...is life so pathetically scripted? So obviously these people have no life of their own or people back home or a girl/boy friend to be answerable to.


The so-called pretty agent begins to spin her web and the man is of course caught. He ends up spending a lot of time with her while his would-be wife sheds tears, drinks glass after glass of water. The reality show compare keeps rubbing it in your face that hawww...that man spent the entire night with the girl! Reality check...din't they want this to happen? Else how do the TRPs come?


Climax: The man is caught red-handed and the fat-load of misery [apni pativrata nari]is all set to bash him up. Suddenly there is a change in her demeanor. She starts to abuse, rant and so on. The man...takes it all in his stride and ends the relationship. He got what he wanted while she bared her pathetic life in public.


Moral of the story: What did the channel and the show achieve? Was there some money to be earned or a foreign trip? None at all. Yet, the atyachaar continues...literally.


P.S: Yes, I have allowed myself to be inflicted with such pain, all thanks to these reality shows.
Email Post
Labels: blah funny life me random rantings