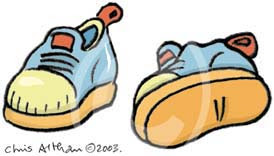 My rather elusive best friend pinged me on gtalk today morning. "Nikki, a rather funny thing happened to me today morning!" said she. Now I don't get 'pinged' by her every now and then [she is going to kill me for this but hey we both are both girls! :p]. I was like, "What happened?"

Ancel [the elusive one] said, "When I boarded the train in the morning to get to work, it was crowded so I got pushed into the compartment as usual. But today in the process my shoe came off and I was pushed further inside so I had no chance of retrieving it!"
Me said, "Eeekks...no shoes in the dirty local compartment?" [Okay our Mumbai locals are not so bad but I cannot imagine boarding one bare feet or rather with only one shoe.]
Ancel said, "Yeah...I thought my sandal was gone...my Clarks! So I stood quietly and then found that someone had actually kicked my shoe inside the compartment. Phew...I quickly wore my shoe!"


I am sure everyone has some incident of this sort to narrate when it comes to travelling in our Mumbai local. I have one too. A cardinal rule of travelling in trains here is that if you live in Andheri or Borivili [far off suburbs in Mumbai] you never get into a Virar [very far off suburb] local at rush hour. But nobody told me that when I started college. So flash back...rewind eight years back, my friend and me wanted to reach Andheri as soon as possible. However, when we got to the platform the Borivili fast had just left and the Virar local stood empty. So we were tempted and coolly got in.


Soon a mob-like crowd filled up our II nd class compartment. In a fast train one can reach Andheri in 7 minutes flat so when the station closed in, we moved ahead only to be cursed, shoveled, and pushed around. Of course we got nowhere. Instead of letting us out, the incoming crowd pushed us in further. I am tiny so I am completely lost. Suddenly a hand pulled me out and that was my friend of course. Phew...a long sigh of relief. But my nightmare wasn't over yet. I realized my left foot was still stuck in the compartment and the train would start any minute.


Panic set in...and I thought I was going to be dragged and then killed by this speeding monster of a train. Now the women panicked as well. So there was a lot of pushing from both ends. My friend was pulling me away from the train while  two ladies were trying to kick my foot out [no exaggeration here!]. After what seemed like a zillion seconds, my foot was out! Phew. But my shoe...my new shoe was split into two! :(


The heal was nowhere to be seen and possibly still being trampled upon within the compartment. I wanted to cry but my pal instead of consoling me, burst out laughing. She kept giggling while I walked bare feet to the auto rickshaw stand out and took a ride home. Bah.