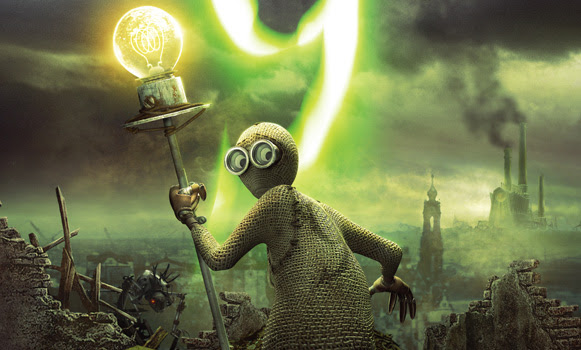 I quit my job as an animation features writer sometime ago and that put an end to a lot of different animation films I could watch. But I love cartoons [there is a major difference between cartoons and animation...but that's later!]
So yesterday a colleague of mine at JAM said that I could go ahead for the press show of Tim Burton's 9 [he doesn't like animated films and he doesn't know what he missed!]I couldn't resist. Long ago I had read about this film. It has big producers and one of them is Tim Burton [check out Nightmare before Christmas]. 9, originally a student short film by Shane Acker won a lot of accolades in 2005 and was even nominated for the Oscars then. So making it into a full lenght animated feature film only spells 'awesome!'
Shane Acker's concept is brilliant. I would compare the film to the likes of Pixar's Wall-E and The Incredibles. Wall-E because it addresses similar issues yet the approach is absolutely different and The Incredibles, because of its racy action and thrill.
Our world is destroyed by our very own machines. Our ruthless greed for technology has backfired on us. Machines have taken over and destroyed the human race. What remains is waste and in this waste we find 9 sticth up-puppets. They are alive and kicking.
The film begins with the scientist creating the last one-9 and then dies. 9 leaves his homes and ventures out to explore when he meets 2, old yet brave. But unfortunate events let the beast take away 2 leaving behind an injured 9. 9 is then rescued by 5 and they meet the others. 1 the leader of the remaining declares that no one will go to save 2 as he chose his own path. But 9 is determined to go in search of 2. 9 is unique as he dares to defy 1 and his conviction leads him to the plant where the beast has taken 2. Along with a timid 2, 9 bravely fights off the beast with a lot of help from 7 [the only fiesty female in the film] but 9 makes a major mistake, he awakens the monster [how? go watch the film and find out!]
Now begins the ultimate fight. The mechanical beast vs. the stitch up puppets! Watch the film as I dont want to ruin the fun. I loved it. The music score is hauntingly lovely and the animation is la jawab...incredible! What I find the best is the attention to the little details in the characters. Every little nuance is important and fits in well just like every piece is important to finish a puzzle.
I would rate it as fabulous! 9 releases on 09/09/09. Don't miss it. [it migt scare the kiddies a bit]
Email Post
Labels: awesome film reviews love me