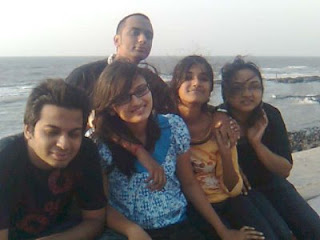 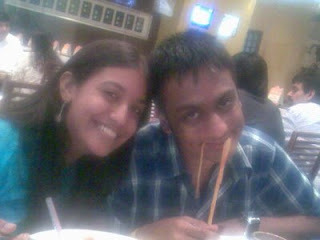 [Me& Chints, Raskhabandhan 2007]
I guess it is high time I wrote about us. "US" comprises of my gang. The only gang or like my dad says, "Jing bang". I cannot imagine my life without them! Our team of six comprises of Chints, Me, Sid, Manu, Chandu and Ush. We know each other from the time we were born. And that's the best part about being first cousins! This post is for Chints. My best bro and my oldest best friend!
Chints is the oldest and the wackiest in the group. He can talk non-stop and utter bull shit on and on, and on! But he is the best bro I could ever ask for. We; me and him, have always been partners in crime. From making Chandu give her den 100 times while playing chuppa-chuppi to running after her with the gas lighter or the silly 'tripple-polio-vaccine!" [ all Chints the mastermind's ideas].
We never required any outsider to play with during vacations. I remeber all my summers being spent with them. The way we sat to eat lunch of tindora, rotli, dal-bhat-shaak [said in one breath!] and aam-ras! We were a riot, all of us. I was the one who was always screaming. Evenings were spent outside, playing dog-n-bone or Thappa/chuppa-chuppi. Nights were spent at Chints n Sid's Char number wala flat. It was full of games. We have painted each other's faces, played bhooth-bhooth, killer police, fought with each other and beat up everyone! He even played house-house with me! Phew.
I remember this instance clearly. Me and Chints were in class five or so. He told me that there is a line of small glass bottles in the fridge and he suspects they are chocolate syrup. But his mom, my Masi, wont let us near it.
So as Masi left the house in the afternoon, we got the others busy in some game and sneaked into the kitchen. I couldn't stop giggling out of excitement as Chints got hold of one of the bottles. He made me smell the syrup and I confirmed, it was definitely chocolate! So we wanted a taste! But before we could lick some off the spoon, we heard Masi coming in and threw the liquid in the sink, put the bottle back in it's palce and fled. But now that we were so sure of it, we confronted Masi!
"Aye-hai", she exclaimed. "It is daaru (alcohol)!" So that was the end of it.
Another time, we were at my place and Chints happened to chop off Chandu's tresses. Hell broke loose [no exaggeration here!] and she hit him hard on his head. He still claims that his head is dented somewhere. Sometime later, Manu was sleeping and he had the cheek to put tooth paste on her face. What followed was a lot of running around and beating!
We loved going to five gardens too. I remeber Chints would tell the Merry-go round wala Bhaiya, "Aur bhagoa! Aur Fast karo!" and Chandu, Manu and me would be shrieking in fright. Sid never sat with us but cried nonetheless watching us! Poor baby!
We played a lot of card games too and Ghulam Chor was a favorite. Yet again, Chandu was our target. We somehow managed to transfer the Jack in her cards. Poor thing! Once we went to Matheran long back and threw so many tantrums that I am embarrassed thinking of them now! This happened because we all wanted a room for us to be together. We wanted to scream, play and have fun all night. And this would not have been possible with our parents around us!
There is so much more to say and to talk about. So many more memories. To our extended families [shady relatives] we are snobs but we don't care. We just don't let anyone into our group and we can't. When we get together, it is understood that we will have a night over and the fun will continue into the morning. We live closeby now but don't meet so very often. But we know and will always know that we have a special place for each other in our lives.
What I write here is a miniscule portion of our lives shared in a few lines. We had a stay over just this wednesday and did everything that we used to as kids. We played Dumb-charades, Killer-police, and Ghulam Chor all over again. Chints is soon leaving for Washington to pursue an MBA. He will be gone by the 10th of July for two whole years. Two years seems like an eternity now. He is busy ctaching up with friends and family.
We will miss him like crazy and the void will remain till he comes back! Love you tones Chints!
Email Post
Labels: life love musings nostalgia random