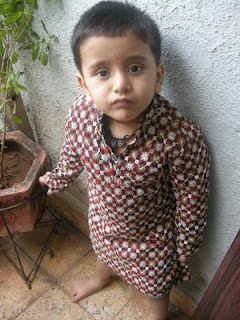 Hello all,
I am suffering from an idea block. Lolz. Whatever that is. Actually a bit tied up...more like adjusting to a new routine of writing non-stop. I am not complaining. I like the work-o-holic atmosphere. I have a new mantra to unwind. I don't read [after the day ends..I can practically dunk my eyes balls in a glass of water] and I don't try writing fiction for Ire [ have deleted two potential stories. Thanks to someone's suggestions].
The best way to unwind is to go meet my three-year old nephew. He is such a doll!
No. Actually he is a little terrorist. Meet Master. Vivaan Chakraborty. He is three and can talk like he is my grand father. Has an opinion about everything. Believe me when I say everything. Once while he was visiting, I had a date so I dressed up and he was like:
why are you wearing this? [I was comfortably clad in a jeans and tee]
You should be wearing a frock! He made a face. But I had no frock but he still insisted on going through my cupboard.
Last time we were in a mall and were playing bowling. He couldn't play [ his head is smaller than the bowling ball] so he was miffed. So we wrapped up jaldi se and the next thing we know...he kissed this little girl who was peeking through the glass. My brother panicked and looked up to meet the embarrassed mother's face. " I don't want to meet the father!" exclaimed my brother.
It was hilarious. Everyone at the bowling alley witnessed this and people cheered and hooted while we dashed from the place.
Recently he came home. I was baby sitting him for about two hours. I had so much fun and absolutely love the way he talks.
He decided that he wants to be an engine driver when he grows up. How cool! Then he will arrange for all his family members to ride with him. How considerate and cute, I thought. And the next moment he says, he will dash into the coming train. I was flabbergasted.
Any car or rather any vehicle has to crash and some accident has to happen. Things function in this way. Period.
He loves drama and so do I. At school, he is the good boy. Friendly and very observant. But will not sit for colouring. However much, his teacher tries, he's off in two mins and looks into other people's work- declares his is the best! [ One day he is going to get into trouble!]
Worst of all, he refuses to speak in english. He speaks perfectly well in Hindi. Understands both English and Bangla. He translates well too. But nope, he is a bengali babu so no english! [these are his exact words!]
Well, when he comes over...its like a celebration. So much hullabaloo! Everyone's lil darling! [Touch wood]. We jump over beds, play hide-n-seek, chor-police [he is always the police and if he is the chor, then conveniently his mom is the police]. Sometimes, he is the tiger and me the lion. Unfortunately the lion is always beaten up by the tiger.
He dances and shows us how to move [ mind you he doesn't like paparazzi!]
Finally, when its time for him to go... we are all so fagged out! But it's like a day well spent with him. So whenever I am highly frustrated or down...I think of him and well, you know what I mean!
Email Post
Labels: life love me musings Vivaan