Into the unknown I 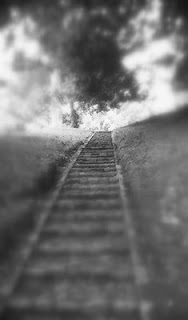 The empty bench comforted him in someways. He was glad of the isolation. The flies buzzing over his head in the yellowjaundice-like lamp light had no effect on him. The platform was almost empty. Just a few stray dogs here and there. They too were asleep. It was past midnight and last local train would be there in ten minutes. He knew he wouldn't board this one either.

He had lost count of how many had gone by since early morning. He had no business or reason to be there. But he had been sitting there all day long. The now empty bench had been warmed by numerous people-- young and old. Some grouchy some calm or talkative. Nobody spoke to him. It seemed like nobody knew of his existence. This had spared him the pain of talking, of making a random comment or being dragged into a conversation. The chana-shing wala had passed by many times. But he like the others did not feel the urge to ask him.

With every incoming train scores of commuters got off and rushed to catch up on their daily lives. They all had a purpose unlike him. He too had a purpose once. But he was lost. Many times during the day he felt he should have gotten into some train. At least he would go somewhere. But like his heart had no desire left in it, his mind refused to budge. Maybe his brain had forgotten to send signals to his feet to move. He was transfixed there on that bench.

Sitting there he wondered as to here would this last train take him if at all he got into it. Did it too have a definite destination? Would he have to get off some place? He hoped not. What if it were a ghost train which came at such an hour unknown to the world. Unknown to the world of real people but known to people like him who did not have a destination. For him it was about the journey. He had left the destination far behind him.

The indicator showed a minute more for the local to arrive. His legs felt cramped as he got up. He did take the train afterall.
Email Post
Labels: life musings random