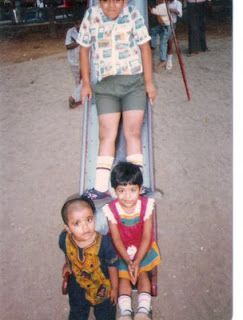 GO ahead, say it out loud!

Popular posts from this blog

Picture courtesy: Google. Only for representation purpose.
Standing on the highway, Roads leading both ways to somewhere, I stand still and wonder, Where do I belong?
The soothing lullabies of the green mist fairies call.  With promises to wrap me in the cool calm fog, Holding me in wet, gentle caresses, lulling the storm within.
The call of the shrill, salt-laden sea sirens,  from the sun-baked rocks, Pull me back To join them as they make me one, in the fathomless abyss of wonders unseen.
I lament my fragile being,  Born with one heart, not two, Torn between the ebb and flow of waves, And earthy scents in muddy dew.
Both offer me refuge,  Cloaking me whole in their embrace, Dust to dust, flesh to flesh and soul to soul.
In this battle between the mind and the heart, The heart but loses steam,  Leaving me stranded on a path to nowhere, never to be seen.
My mind has been wrought with depression and all things crappy. This is a result of binge-watching a…
Post a Comment
Read more

9 Things My Dog Taught Me About Life


I am guilty as charged. Per my husband, I spend every waking minute with my dog. If I am watching TV, he’s by my feet, if we plan an impromptu drive, he wants to come along, and at times, we do take him. My evening walks happen only because I have to take him. My social life is all thanks to him. And if you happen to mention the dog at a social gathering, I can go on and on about the pup even if we have nothing in common otherwise. Hell, I started an Instagram page just for the dog on popular demand!
I can assure you, though the husband isn’t convinced, that its all the dog’s doing. His popularity has only grown over the years, and who can resist those googly puppy eyes? He works his charm on all, irrespective of age, gender (partial to women though), color, and caste. He’s gentle with kids, super active with people who can keep up, he’s sensitive, always ready to share food (only yours) and so much more. His licks and cuddles have the power to melt glaciers and his …
2 comments
Read more

November 06, 2017
I feel sorry for ‘Sorry’ – such an abused term. When you come to think of it, it is just a word, right? It holds significance in some instance and at times, it is a mere excuse. But we humans absolutely love it as an excuse, don’t we? I use this term a lot; I mean a lot! I think of myself as a kind being, and hence, if I happen to push or ignore (deliberate), I say ‘sorry’. I say sorry for things that may not need a ‘sorry’. I say ‘sorry’ to people I am not really feeling sorry for (don’t read this the wrong way). In short, I say ‘sorry’ a lot like I have already admitted. It is my ticket to moving on, a ticket to redeem myself for mistakes and sometimes, tinged with slight sadness (maybe).


But is ‘Sorry’ the right word? Mean, is it even appropriate? Like they say, first you commit the murder and then say sorry. What is the point of it? I would say nothing. Sorry – the term originated from the West Germanic term Sore that evolved to Sarig, meaning pained or distressed. It is also known…
Post a Comment
Read more

Ire
Hi, I am Nikita.I am writer by profession, a dog lover, a voracious reader, foodie and travel junkie.